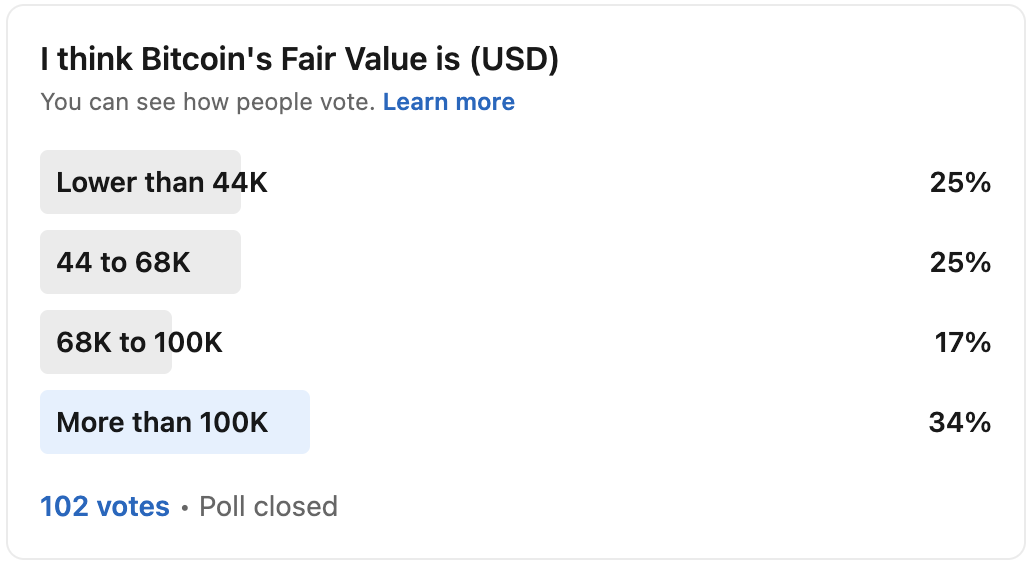 21 K
Bitcoin‘s fair value is $20,851, according to Claude Erb, a former commodities portfolio manager at TCW Group, who calculated Bitcoin’s fair value according to the Metcalfe’s Law valuation model, which holds that a network’s value grows according to the square of the number of users. Accordingly, this fair value will grow as more Bitcoins are mined. Source: https://www.barrons.com/articles/bitcoin-value-51642471539

38K to 50K
J.P. Morgan’s strategists led by analyst Nikolaos Panigirtzoglou, estimated bitcoin’s fair-value level at around $38,000 based on the #cryptocurrency being around four times as volatile as gold, and estimated that the fair value would increase to $50,000 in a scenario where the volatility differential narrows to three times. Source: https://markets.businessinsider.com/news/currencies/bitcoin-price-outlook-fair-value-volatility-gold-jpmorgan-cryptocurrency-digital-2022-2

250 to 300K
According to a recent article at Seeking Alpha by Giesbers Investment Strategy, a pseudonym of a private investor from the Netherlands, he mentioned that through his calculations and comparisons with gold, he would expect the fair value of Bitcoin to be between $250,000 and $300,000 in 2030. Accordingly, this is his balanced views albeit his self-professed disclaimer that these scenarios are heavily speculative and are based on very loose assumptions. Source: https://seekingalpha.com/article/4468140-bitcoin-a-fair-value-estimate

While we may not be able to know for certain of what Bitcoin’s fair value is, we all can comprehend that Bitcoin’s price is primarily affected by its supply, the market’s demand for it, availability, and competing cryptocurrencies. It reached a new all-time high over $68,000 on Nov. 10, 2021, but has since fallen to less than $44,000 on 10 Feb, 2022.